Enquire about Antigua Rainforest Canopy Tour
When are you thinking of travelling?
Get Prices
100% Privacy Guaranteed
See ABTA & ATOL details 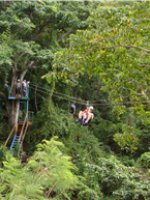 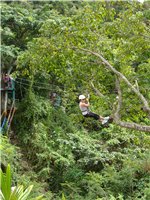 Get prices for Antigua Rainforest Canopy Tour
When are you thinking of travelling?
Get Prices

When I was offered the chance to spend an afternoon swinging around in the trees I tried to get out of it by saying that my monkey suit was at the dry cleaners. That excuse didn't wash (forgive the pun) and so at lunchtime I arrived at the rainforest canopy tour company.

I was given a tour by Heli (one of the staff ... not by helicopter!) who explained that their 20-30 well trained staff would help make sure that I stayed in the trees rather than becoming leaf litter. As all I could hear from the forest were shreeks and screams I had yet to be convinced!

At the safety briefing all our harnesses were laid out and we were told to step into them and not adjust them. This was to be done by the staff partly to ensure that they were put around the waist correctly but also tightly enough to ensure that I would never have children in the future! The briefing was well done and despite the size of the trees ahead of me I felt very relaxed that I was in safe hands.

Myself and around a dozen or so other guests, put on our crash helmets and climbed up some steps to the first "zip line". This consists of 2 wires independently attached to trees so that in the event that my considerable frame caused the first to surrender, the second would be there to assist.

I was hooked up and ready to fly across a 100 foot gorge. How high was it halfway across? To be honest I had no idea as on your first zip you are too busy looking up at your clips and wheels running along the cable, praying that they don't decide that the high wire isn't for them.

We were given big gloves as technically you are meant to use your hand to brake at the end. On my first "zip" I was so anxious to get across that I felt careering towards the tree at the other end as fast as possible was the best plan. Luckily there are some well trained people armed with wooden braking blocks at the other end who are well equipped to deal with speeding zippers like me.

Thereafter we did another 8 zips of varying length and depth. The highlight was the "screamer" which was  a massive 328 feet long and 300 feet high. By the time you reach it you have built up so much confidence that you feel able to put your underpants over your trousers and do your superman impression as you fly across the valley below. I did try to put my superman arms out but it just resulted in me twisting backwards and nearly flying backwards into the attendant at the other end.

After you have done your 9 zip lines you have the option to complete an aerial assault course which was a bit more physically demanding. On this course you are confronted by numerous types of rope bridges and have the chance to play like Indiana Jones and Tarzan. It was quite exerting to begin with as your arms are hanging on for dear life, however when you start to get used to it you use your arms less as you start to trust your legs more.

The final experience which had only just been opened at the time of writing was a 50ft vertical drop where you jumped off supported only by a rope and an oversized fan. The idea is that the faster you fall the more the fan spins and slows your descent. It's the sort of thing that stunt men use in the movies to produce realistic falls which slow the stuntman down after he has disappeared out of shot.

So I looked up, prayed to the oversized desk fan and jumped. The first few yards were the worst as you couldn't feel the fan at all. For a split second I wondered whether they had set it to blow rather than suck but then it kicked in just in time and I landed very ungraciously in the sandpit at the bottom. I am sure the sand wasn't there for safety reasons but just to show a mark for anyone uncoordinated enough to land on their backside in a heap like I did. Obviously you get photographed during your experience (normally at the most frightening times) and the company are very helpful to ensure you get the photo in any format you want (CD, e mail, memory card etc..).

It was a great couple of hours and I would highly recommend it to anyone apart from anyone who is petrified of heights. If like most of us you don't like heights but can just about bare them then I would say there is no better experience to become even more comfortable with heights. At the end on the rope bridges I was swinging across them like an over zealous extra in the Jungle Book. This was about 5 seconds before I promptly landed on my bottom and sent about 5 other people on the bridge scrambling for their safety lines!

For further information and prices for this fantastic experience just e mail the company by clicking here.

Get prices for Antigua Rainforest Canopy Tour
When are you thinking of travelling?
Get Prices