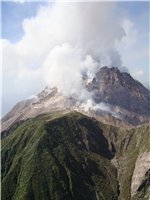 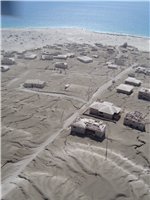 We knew that Montserrat was a volcanic island. However had we had known how volcanic it was prior to the helicopter trip we might have had second thoughts!

We arrived at Caribbean helicopters and were giving a full safety briefing. In consisted of a professional DVD and putting a life jacket around our waist which bore close resemblance to a yellow nappy (diaper). Knowing how afraid my partner was of flying I wasn’t sure which would be the most useful!

We were told that the helicopter we were to be flying in was statistically the safest single engine aircraft in the world. So why not fly it straight at an active volcano just to test those statistics to the max?

Take Off from James Fort Antigua

We took off from Caribbean Helicopter’s helipad near Fort James and it was exhilarating straight away. We dramatically swooped over the large cruise ships moored in at Heritage Quay in St James and tried not to interfere with the games of cage football, cage tennis and other sports that need to be caged to prevent the balls ending up at the bottom of the sea!

We then flew out to sea over brilliant blue waters around Antigua. Despite being at 2,000 feet the water was so clear we could see the reef outlines under the water. We even saw turtles swimming on the surface. Our pilot said that from late February until April you even have chances to see whales as they come to give birth in the safety of the warm waters of the Caribbean sea.

The flight out to Montserrat took around 15 minutes and we saw the island virtually as soon as we left Antigua. Not because of the size of the island or its mountain but the column of steam and ash that was erupting from the top of it. The volcano had been dormant for millions of years and then 2,000 years ago it woke up…. with a bad headache!

The headache continued in the 1980’s, 1990’s and in fact a few weeks before we arrived in 2010. As we approached the island we could see the houses that had been overcome by the lava and ash from recent eruptions. It was like getting a tour of Pompei just a few weeks after it was engulfed. Buildings were without roofs and were waist deep in a thick brown mud.

Because volcanic ash ironically has nutritious life giving qualities the island vegetation not affected by the eruptions is a lush, thick carpet of greenery. This means you can take some spectacular photographs with light grey steam clouds at the top, thick browns of varying shares in the middle all surrounded by brilliant green plantlife.

We circled the volcano for around 20 minutes weaving in and out of the mountains, trees and wrecked houses. All the time the pilot was giving us interesting facts about the island and its inhabitants (half of whom took up the option to leave given by British after the last eruption). It was an utterly fascinating tour, one of the best I have ever experienced.

As we flew back we used our radio microphones to ask questions of the pilot. Trying not to let our questions coincide with conversations with air traffic control … as there was a large 747 trying to land near us!

If you are lucky enough to visit Antigua while Montserrat is still active then the trip with Caribbean helicopters has to be right at the top of your list of things to do.