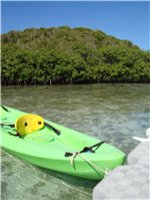 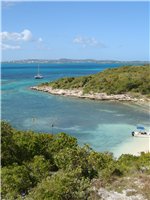 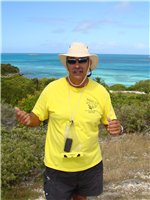 We visited “Paddles” Kayaking in Antigua with a certain amount of trepidation because in their literature they mention their kayaks are ocean going kayaks and that we would experience a “sea kayaking” adventure unlike any other. I therefore had visions of cancelling my flight ticket home as it sounded like I might be rowing my way back to the UK!!

Not to fear, when we arrived Conrad our host briefed us on what would be a much more sedate and enjoyable trip. He said that first we would be paddling in the sheltered mangrove inlets around the island while he pointed out interesting wildlife and habitat features. We would then transfer into a motor launch to visit some other smaller islands and participate in a bit of snorkelling.

The kayaks themselves were very comfortable and seemed very secure, accommodating all shapes and sizes. They are designed for 2 people to share which requires a certain amount of teamwork ....... otherwise you end up mangled in the mangrove!

Also, the fact that the heavier person should go at the back caused a certain amount of debate amongst our group with certain ladies not being too happy with some of the remarks made by their husbands!

Kayaking in the mangroves

We spent over an hour paddling around the mangroves in crystal clear water where you could easily see the bottom. The depth was never more than around 8ft and so you also felt very safe. As a final precaution there was a motor launch always behind the group. I am not sure whether this was a safety feature or to nudge any stragglers!

One thing I particularly enjoyed was the talks that Conrad gave about how important the mangroves are to the local eco system. He explained how they protect the shoreline from storms and how they act as a nursery to young fish. They were also the reason for the clear water as they filter a lot of sediment.

The whole tour had a strong ecological theme which the people at "Paddles" teach to local school children as well as tourists. Hawksbill turtle numbers in particular are now starting to show signs of recovery, partly due to the work that the team at “Paddles” do. For example by explaining to local children that they should not drop litter in the sea as clear plastic can resemble a jelly fish which happens to be one of the Hawksbill’s favourite food.

Just when we thought we had finished our physical excursion for the day we got in the motor launch and visited Great Bird Island. We had a 5 minute climb to the top where we could see some fantastic sea birds as tiny lizards scurried around our feet doing their daily business. We were pointed towards various islands and properties owned by world famous celebrities including Paul McCartney and Oprah Winfrey.

The island had a wonderful little beach and some people sunned themselves while others snorkelled on the reef that surrounded the island. It was a great way to finish off a day where we felt totally fulfilled.

The icing on the cake (almost literally) was the homemade banana bread and rum punch that Jennie had made for us all when we returned.

We had a fantastic day and can highly recommend Paddles for kayaking in Antigua.