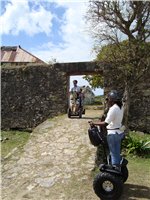 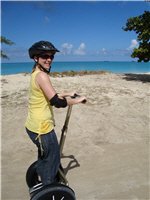 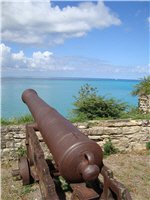 We arrived at the Segway office in St Johns and were greeted with a friendly smile and a punch drink. Luckily it was non-alcoholic as I was worried that controlling the segways was going to be tough enough without being drunk in charge of them!

We were shown a 15 minute safety video which explained, amongst other things how we were to get on the segway when its display had a smile and not when it showed a frown! It seemed to be a very user friendly machine but I wasn’t going to know for sure until we tried to ride it for real.

We then had a 10 minute taxi ride to where the segways were waiting. We were in a group of around 8 people and we were given one machine each. We all stepped on and seemed to defy the laws of physics as the machine stayed upright despite only having two wheels. It works by powerful gyroscopes sensing where you are on the machine and making thousands of necessary microscopic adjustments every second to ensure that you remain upright.They are suitable for any age, indeed we were told that 89 year old had used it a few weeks before.

So we all stepped on to our machines and started doing simple exercises such as moving forwards, backwards and turning around. All 8 of us did it at the same time. I wouldn’t say we went quickly to start with as we looked more like a procession of elderly people ready to go shopping on their power scooters!

After just 15 minutes of practice we were ready to hit the open road. We continued in single file along the roads and beaches to the North of St Johns. It was a fantastic feeling to glide along at about jogging pace without having to exert any effort.

We arrived at one beach and tourists started to take their cameras out to photograph us. I was tempted to say “Yes, we are from the future and we mean you no harm!”

As well as enjoying fantastic scenery we stopped every now and again and were given a very interesting talk about the local fauna and history. We were even allowed to taste tamarin and raw sugar cane.

During the tour we visited James Fort which was set up by the British to help protect the island. Still in tact were some formidable canons looking out to sea, none of which had ever been fired in anger. In the distance we could see the volcanic island of Montserrat which we were told had a small eruption just a few weeks previous.

We enjoyed fresh fruit and water before we were allowed to “freestyle” with our segways in the Fort grounds. As we all zoomed around semi in formation we looked like a drunk motorcycle display team!

When the instructors had seen enough “near misses” for one morning they rounded us up and we proceeded back to base. We were allowed to really open up the throttle and ride side by side next to the beach which was fantastic. I must have reached at least 10 miles per hour!

I can highly recommend the Segway tour. These machines are so intuitive anyone can ride them. Whatsmore the tour is educational, beautiful and most importantly … fun!