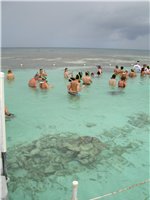 When I was told I had a lunch date with a 5ft tall female that loves calamari I started to get excited. When I was then told it was going to be a Sting Ray I wasn’t quite so sure!

We had a safety briefing which was pretty uncomplicated. Apparently you just need to step carefully and feed the sting ray from underneath rather than its nose holes on the top. Otherwise you will may get the reaction you would expect if you have just shoved a pair of hot dogs up someone’s nostrils!

I had no idea what to wear for my lunch date with the rays and so I plumed for a pair of swimming trunks and a mask/snorkel provided by the Sting Ray City company. We all climbed aboard the boat and the 10 minute boat ride flew by as we zipped through the waves.

As soon as we moored up we saw what looked like large black dustbin lids circling around the boat. It was feeding time by us or on us? That was the question going through my mind.

We had a group of around 30 people and it seemed to be the men who were designated to be the first to enter the water. The men did generally turn into screaming girls though as soon as the first sting ray brushed the back of their legs. In these circumstances you were told simply not to jump, otherwise you could land on the rays.

I was in when the ladies arrived and had I wanted to I could have been hugged by more ladies than a new year’s eve party as they seemed to seek protection by huddling together.

My first kiss in Antigua!

The first “hands on” experience was being handed a 5ft wide ray that seemed to be stroked into an semi-hypnotic state by a handler. Apparently the rays “sleep” if you hold them gently enough under their “wings”.

As a few people before me opted for a light touch rather than a full hold with the ray I stepped up.

I held out both hands and was passed a soft, slippery, wet creature with its eyes looking straight up at me. It was only in a half sleepy state as it started to nuzzle its way up to my chest! I managed to resist the intended love bite and handed my ray on to the next person.

After that we were given some squid to feed the rays. They can suck up from squid from 3-4 inches which was a good job as I was not going to go that close to their mouth.

My intended dinner date eyed me up with its skyward pointing eyes, I dropped the squid and within moments the circular vacuum cleaner had passed by, reversed a little bit and the squid was gone.

Snorkelling on the reef

While others fed, screamed and schreeked in equal measure we had time to snorkel on the nearby reef. This was a real bonus that I didn’t realise when we signed up for the tour. The reef is a mixture of sand and coral that is only about 4 foot deep and so you can enjoy it in completely safety. We saw a fantastic array of fish and the tour guide said he had seen a 6lb lobster there in the morning. I am sure he saw a mermaid as well but nevertheless there was plenty to see.

One thing that I thought was particularly great about this trip was that there was a bit of rain on the day we visited but despite this we had a fantastic time. When you are holding a 5ft squid eater you don’t worry about a spot of rain. You are getting wet anyway! I can therefore recommend this trip for both the wet season and dry season in Antigua.