Enquire about Diving in Antigua
When are you thinking of travelling?
Get Prices
100% Privacy Guaranteed
See ABTA & ATOL details 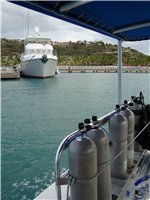 Get prices for Diving in Antigua
When are you thinking of travelling?
Get Prices

We stayed at the St James’ Club hotel in Antigua which is one of the few hotels on the island to have its own dive school. As a diver I think it’s a good idea to use a dive school attached to a hotel as it is likely to mean 1) less journey time to the dive school; and 2) a larger organisation supporting the dive school rather than a “one man band” with fewer resources.

Our choice proved to be spot on as we were very impressed with Linda who ran the dive school. I am a rescue diver and my partner is a newly qualified diver. We asked for a refresher course which was going to cost around $50 each. However Linda found out a bit more of our experience, went through some drills, asked questions and determined that we were ok to dive without the need for the refresher. This was “refreshing” (forgive the pun) as she could have charged us extra.

She told us to come back at 8.30am the next day whereupon she would determine which dive site we would go to. She makes her decisions on the day based on wind direction, sea conditions and of course that all important instinct! As Linda lives on a boat there is no better person to judge the conditions!

So we arrived and were lucky enough for it to be just myself, Katie and the instructor. Again more capitalistic dive instructors may have decided to try and combine us with another dive group. Instead we went out with the boat all to ourselves.

While the waters within the bay around St James’ Club were nice and calm the open sea had a bit of a swell. We flew through the waves and headed for a reef outside the opening to English Harbour. The reef was next to a rock formation called Hercules’ pillars.

We dived down and because of the swell it was a relief to get away from the surface. We went down to around 15 metres and explored the reef. While the surface was rough it was very calm on the sea bed with only the occasional current when we went closer to shore.

We saw plenty of the usual reef fish and as an extra treat we saw a barracuda and eel. We were told that turtles and dolphins were often found in the area and that in the months from February to April you could also hear the sounds of whales.

On the way back on the dive we also swam through a great rock formation which was close to shore and so we had to call upon all our diving skills to navigate through it taking into account the on shore swell and current. One minute you were swimming to stay still and the next you were flying through the rock pillars like a true aquatic native animal.

All in all we had a fantastic time and have to thank Linda at St James’ club diving for her professionalism.

Get prices for Diving in Antigua
When are you thinking of travelling?
Get Prices