Enquire about Maracana Stadium
When are you thinking of travelling?
Get Prices
100% Privacy Guaranteed
See ABTA & ATOL details 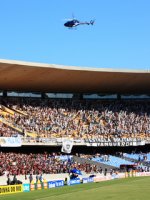 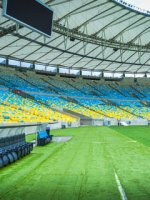 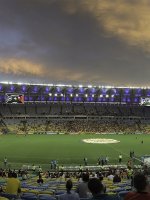 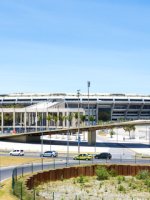 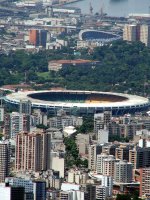 Get prices for Maracana Stadium
When are you thinking of travelling?
Get Prices

The impressive Maracana Stadium is the place to go in Brazil if you want to see an intense game of football. Expect loud chanting, drums and flares for the complete experience. Built in 1950 specifically for that year’s World Cup tournament, this special stadium has since hosted many football fixtures and concerts.

Hosting football matches between the major teams in Rio is its main purpose. The derby between Fluminense and Flamengo is one of the liveliest contests you could watch at the Maracana – the local towns don’t go easy on each other!

The stadium’s claim to fame is that it achieved the highest recorded attendance at a World Cup final match. They can thank all 199,854 attendees for that tremendous accolade. In 2010, Maracana had some alterations during a big renovation project. Today, the stadium has a capacity of 78,838 and is an all-seated venue. It is still the largest of Brazil’s stadiums, but when it comes to the whole of South America it comes in second place. The largest stadium across the country is Estadio Monumental, which can be found in Peru.

Rio’s Maracana Stadium received a fair amount of media exposure in 2016 as it was the chosen venue for the opening and closing ceremonies of the summer Games – both the Olympics and the Paralympics.

For those who don’t get much of a buzz from watching live football, there is a sports museum inside the Maracana where you can find tons of memorabilia. You’ll see momentous photographs, famous Pele shirts and an array of trophies.

The remarkable Maracana is easy to reach. You can get there via metro and you’re practically dropped outside the stadium.

Place an enquiry today and one of our travel experts can help you arrange an unforgettable football experience at the Maracana.

Get prices for Maracana Stadium
When are you thinking of travelling?
Get Prices