Halloween at Dracula's Castle in Romania

Enquire about Halloween at Dracula's Castle
When are you thinking of travelling?
Get Prices
100% Privacy Guaranteed
See ABTA & ATOL details 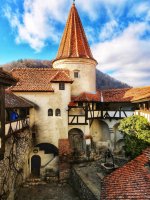 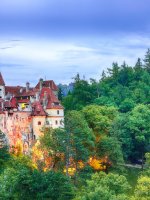 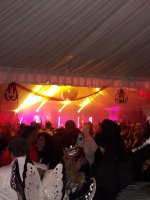 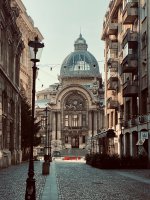 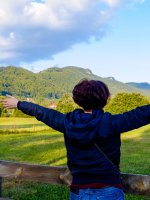 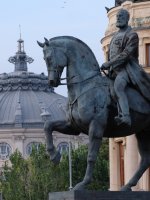 Get prices for Halloween at Dracula's Castle
When are you thinking of travelling?
Get Prices

You’re probably here because you’ve found out that Dracula’s Castle & Transylvania are real places and you’ve added them to your bucket lists!

If you fly to Romania and travel to the small commune of Bran within the mountainous region of Transylvania, you’ll find the stunning Bran Castle which takes on an eerie façade as night falls…

Bram Stoker, the British novelist who created the character ‘Dracula’ in 1897 wrote his tales after being inspired by a description of Bran Castle, causing the structure to be known world-wide as ‘Dracula’s Castle’ to this day.

Locals embrace this local legend and celebrate Halloween in style by decorating every inch of Bran with pumpkins, spider webs and all things spooky, filling the nights with music and offering stands of tempting souvenirs.

As for the castle… the party is HUGE! Light shows are depicted against the external walls, the winding corridors are filled with candlelight and actors greet you dressed in gothic, vampire attire. There are hundreds of people all dressed in fun costumes exploring the castle before heading onto the nearby grounds for a fabulous party held in a giant gazebo. One thing is for sure, you’ll be partying until the early hours!

For flights, accommodation, transfers and selected meals, you can expect packages to start from around £1,000 per person. We have access to hundreds of suppliers so we can search the market for the best options on your behalf.

Whether you’re looking to head straight to Bran for the party, or spend some time in the Romanian capital of Bucharest before beginning your Halloween adventure, we can help - Place an enquiry using our provided form to get started!

Get prices for Halloween at Dracula's Castle
When are you thinking of travelling?
Get Prices

Halloween at Dracula's Castle in Romania