Enquire about Koh Samui Beaches
When are you thinking of travelling?
Get Prices
100% Privacy Guaranteed
See ABTA & ATOL details 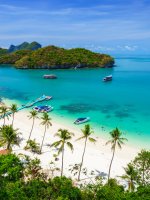 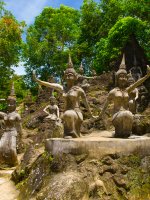 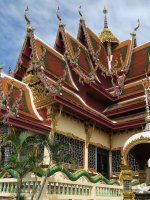 Get prices for Koh Samui Beaches
When are you thinking of travelling?
Get Prices

Away from Chaweng, further south on the east coast is Lamai , a smaller, but less crowded beach. Lamai was the original destination for travellers to Samui and the town is a bit more obviously low budget, but it has its own distinct appeal. Inland, Lamai turns out to be a large, beautiful valley to explore. Nightlife here can be both lively and unusuaul, such as the weekly all-girl Muay Thai boxing matches.
There is a lovely old Wat or temple and offers two of the most endearing original spas on the island: “The Spa” actually on the beach and the “'Tamarind Spa” – probably the most sophisticated spa experience on Samui.
For spectacular views, Mae Nam in the centre of the north coast reveals Koh Phangan to the north and the Ang Thong National Marine Park eastwards. Maenam is quieter and more relaxed than the east coast, with local Thai community still pretty much in tact.  It is also home to the Santiburi Resort - considered by many to be the premier hotel on the island. The major golf course on the island is also in Maenam. The waters here are calm and clean, protected by Koh Phangan from strong currents and Mae Nam is usually much less populated than the east coast beaches – perhaps because the sands are traditional golden rather than white.
Meanwhile, Bophut - the beach bay just to the east of Maenam – has an even more relaxed lifestyle and is more traditional than the larger communities. It is popular with a more chic sort of traveller and has a number of more expensive - but very good - French-owned cafes and restaurants.
In a secluded bay on the north-eastern tip of the island is the small beach of Choeng Mon – a gem for visitors wanting peace and quiet. There’s not much of a town – a throwback to the early days of Samui’s opening up to Western tourists - but there are a number of small restaurants and a couple of shops – oh and some very luxurious hotels surrounding the bay, while only five minutes north from the bright lights of Chaweng.
For a “catch it while it lasts” beach, try Tong Krut on the south west corner of the island. It is currently one of the quieter areas of Ko Samui but is being proposed as the site for the islands future mega-yacht harbour.
And on Bang Rak, 2 km east of Bhophut, is a 19-m high, gold-tinted statue of the ancient spiritual master that overlooks the entire bay. Although quite close to the airport, Bang Rak is one of the calmest beaches, although the huge sweep of its jade-coloured waters can be murky on some days. Bang Rak is the setting off point to sister island Ko Phan Ngan via a daily ferry.

Get prices for Koh Samui Beaches
When are you thinking of travelling?
Get Prices

As of 26th Jun Holidaysplease is rated: